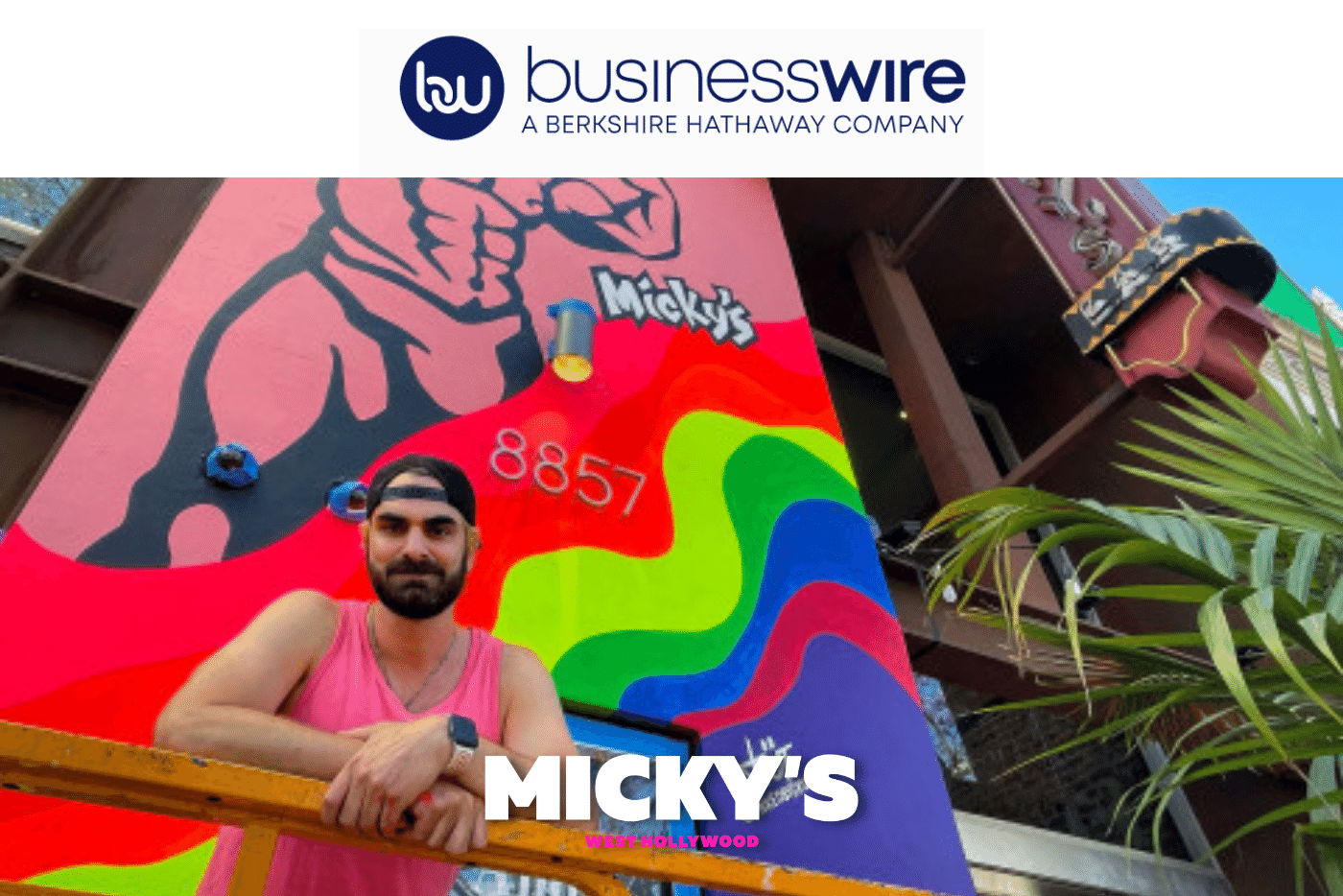 LOS ANGELES–(BUSINESS WIRE)–Fine artist Sküt unveils his signature style in an expansive mural welcoming West Hollywood back to Micky’s. Fluorescent rainbows flood the walls beneath ascending, Pride-themed heart balloons and a 30-foot go-go-boy who towers above the boulevard in preparation for Micky’s triumphant return.

With community, equity, and visibility as central themes to his design, Sküt honors Queer history and Micky’s anchor presence, a WeHo staple since 1989.

“Micky’s is my first gay bar,” admits Sküt. “I was scared and closeted as a freshman at USC. I ventured out to college night and was embraced by new peers who supported and helped my coming out journey.”

The artist has a rich history with Micky’s. Having launched Grindr in 2009, he partnered with Micky’s and Stefano Rosso in their first ever LA Pride collaboration. He says, “they took a chance on me. I designed collateral for the parade and festival. It was a success and both the partnership and friendship have endured.”

Entrepreneur Stefano Rosso, who sourced the artist, says “I recognize creative minds and knew Sküt was a perfect match for this opportunity to create a strong message that says Micky’s is gay and here to stay.”

The Micky’s Comeback mural is a natural evolution of that relationship.

“The original Gay Pride flag, designed by the late Gilbert Baker in 1978, included eight colors with specific meaning. My design incorporates those hues along with the Black Lives Matter and Trans flag colors into a bouquet of hearts that celebrates Pride everyday,” adds Sküt.

Where the westward portion focuses on LGBTQIA Pride, the east wall is bold and unapologetically gay. It features a massive go-go-boy in a stylized illustration inspired by 80s cartoons, a throwback logo evoking Micky’s original masthead.

“I love art and I fight for the gay cause,” says Micky’s founder and owner Michael Niemeyer. “This partnership with Sküt is the perfect moment to bring a visual beacon of Pride, joy, and hope to the WeHo Rainbow District for our reopening.”

“Micky’s is known for its bartenders, music, and men. I want to celebrate its ongoing impact on the neighborhood,” Sküt concludes. “Whether you want to meet new people or just have fun, it’s the perfect destination. You are not alone at Micky’s.”

A portion of the artists proceeds from the Micky’s Comeback mural will be donated to the Los Angeles LGBT Center on behalf of Sküt.

Sküt the artist (Scott Lewallen, @inkedbyskut) is best known as Co-Founder and original designer of Grindr. His work is on display in a Pride art exhibition at The Artist Tree @theartisttree, West Hollywood. He currently is Vice President of TAG Gallery @taggallery, Los Angeles. Born and raised in Los Angeles, Sküt graduated with a Bachelor of Arts degree from the Annenberg School for Communication, University of Southern California.