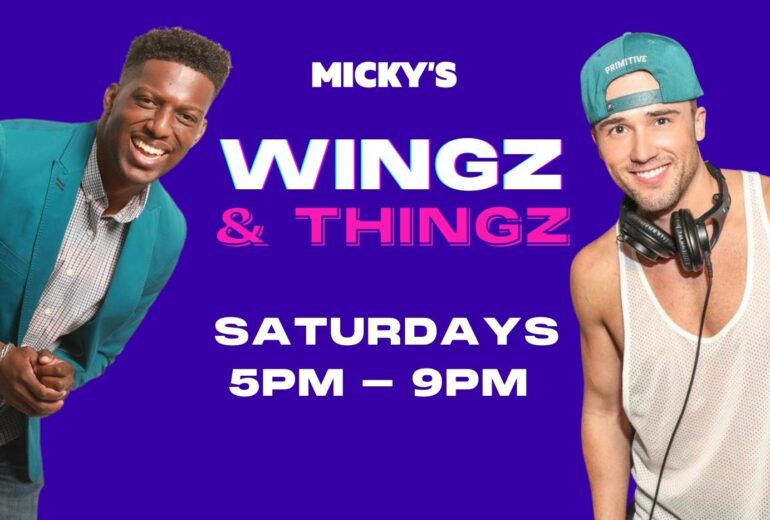 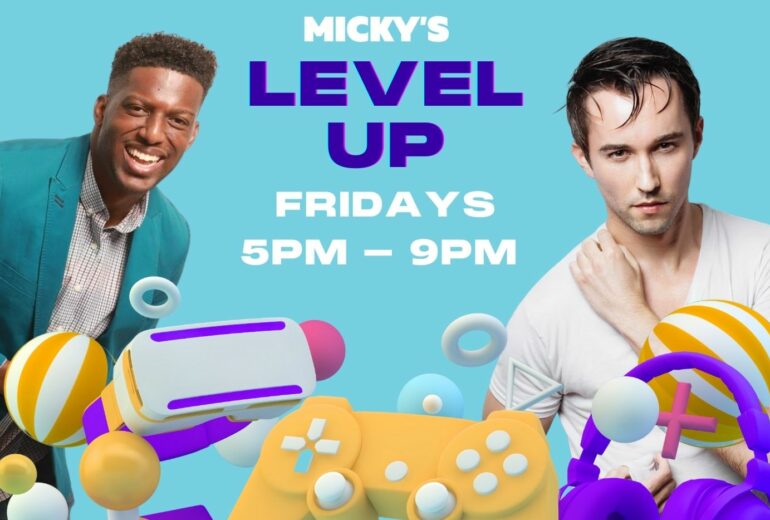 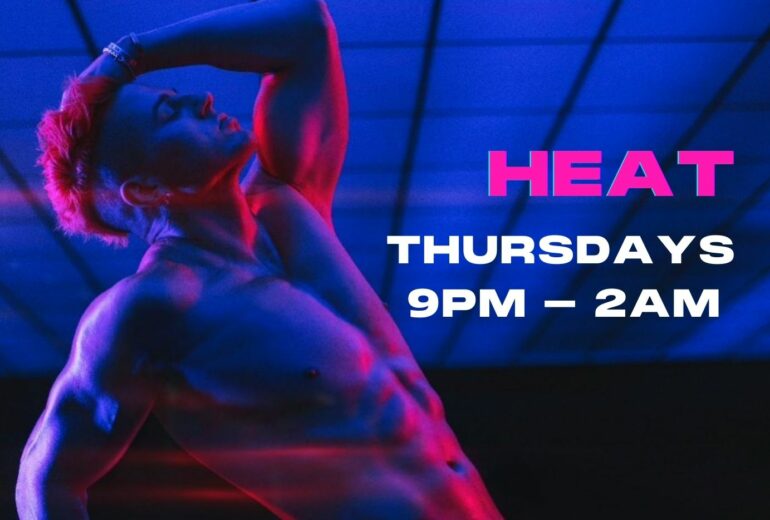 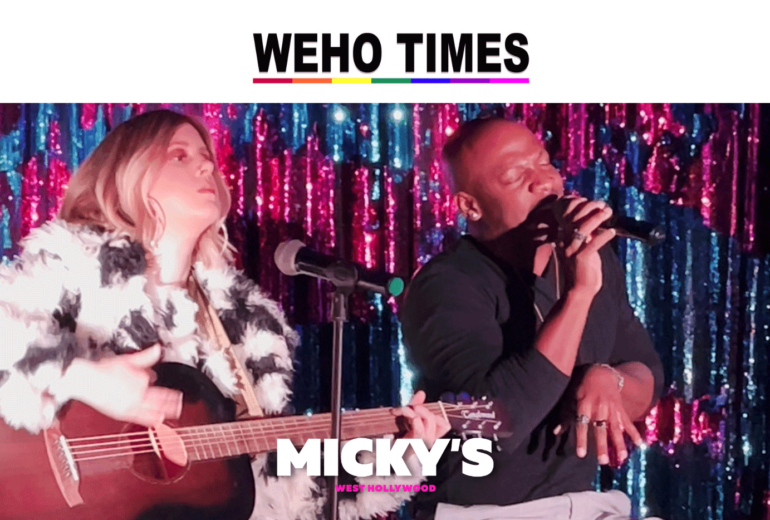 Story published by WEHOTIMES.COM BY By  Brian Sonia-Wallace Last Wednesday, Micky’s WeHo, one of the largest nightclubs in West Hollywood’s Boystown/LGBT Rainbow District, launched something a little different from its usual drag and DJ nights: a new weekly open mic series called The Mic @ Micky’s. It returns this Wednesday (and every week herea ...

The Kitchen at Micky's 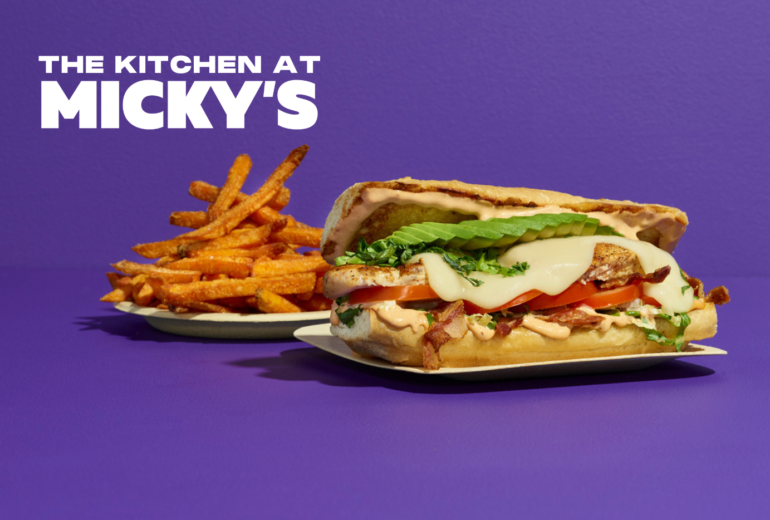 Who said a club can’t serve good food? The Kitchen at Micky’s features a wide variety of mouthwatering food items. Make sure to try our food the next time you’re at the club. Serving food from Mondays till Fridays, 5 – 9 PM,  Saturdays 1 – 9 PM & Sundays 3 – 9 PM. Enjoy your meal with a happy hour beverage available Mon – Fri from 5 PM – 9 ... 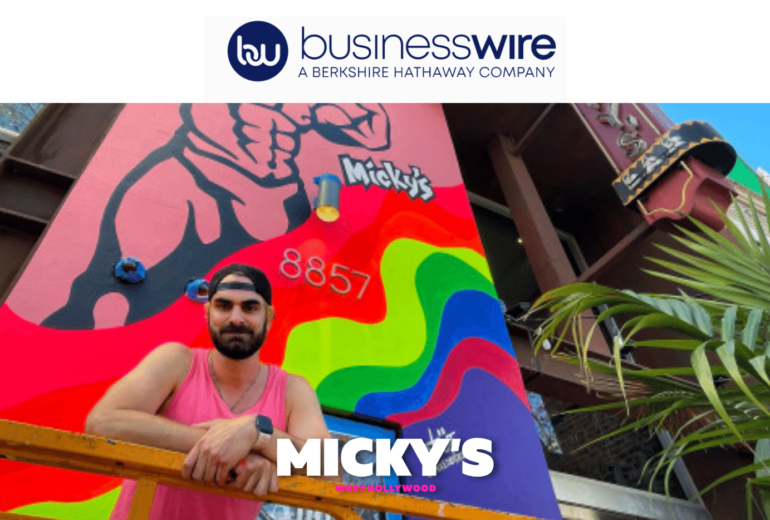 Story published by businesswire.com LOS ANGELES–( BUSINESS WIRE )–Fine artist Sküt unveils his signature style in an expansive mural welcoming West Hollywood back to Micky’s. Fluorescent rainbows flood the walls beneath ascending, Pride-themed heart balloons and a 30-foot go-go-boy who towers above the boulevard in preparation for Micky’s ... 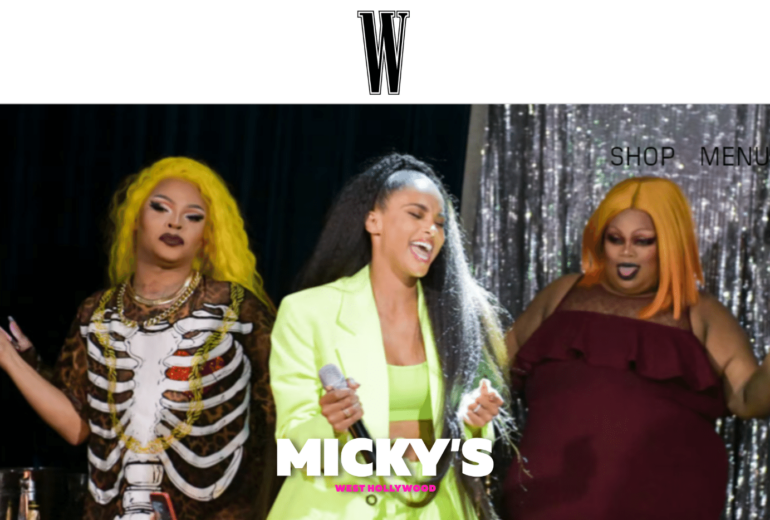 We are thankfully living in an era when we don’t have to simply wonder what would happen if our favorite pop stars popped up, sans security guards, at our usual nightlife haunts just to have fun with us. While Jennifer Lawrence and Adele seem to be making the rounds at all of the New York City nightlife hot spots this month, it looks like West Coast gay bars have found their answer to the East Coast’s pop-up-diva trend of the moment in Ciara.

On Thursday night, current RuPaul’s Drag Race contestants Vanessa “Vanjie” Mateo and Silky Nutmeg Ganache hosted the show’s weekly viewing party at Micky’s, a popular gay bar in the West Hollywood neighborhood of Los Angeles. The hosts put on Ciara’s “1, 2 Step” and danced along, and when the Missy Elliott verse began to drop Ciara herself emerged from behind the curtains in an on-trend neon-lime suit, much to the surprise of everyone in the audience.

Ciara then performed a rendition of her new single, “Thinkin Bout You,” while Miss Vanjie vogued in front of her and screaming bystanders captured the performance with their phones.

While Ciara’s performance appeared to be a big surprise for audience members who shared snaps of the experience on social media, Micky’s had already teased out an appearance by a special guest on the bar’s website and social media pages, encouraging fans to “1, 2 step over to Micky’s,” so some eagle-eyed fans of the singer might have guessed she’d be the one to show up during the viewing party. She was also a guest judge on RuPaul’s Drag Race: All Stars 4 in December 2018, along with Kacey Musgraves (who also joined her on an episode of RuPaul and Michelle Visage’s podcast, What’s the Tee), so it’s a safe bet that Ciara was a highly sought-after surprise guest for a Micky’s viewing party.

Lady Gaga’s an international pop star, but that doesn’t mean she’s too cool to party with the people!

On Monday night, the “Applause” singer dropped by Micky’s, a popular gay club in West Hollywood, to film the crowd and herself for her single’s lyric video.

Mother Monster gave her  L.A.-area fans a heads up just after 10 p.m., tweeting,  “I will definitely NOT be at Mickys tonight, and I will definitely NOT expect you there to be in my lyric video. ” Eyewitness Jenner Anderson tells E! News exclusively that the singer arrived around 11:15 p.m. and stayed for approximately 45 minutes.

We’re told that Gaga filmed the crowd, encouraging them all to clap. She also filmed two fans who had similar face makeup on and then positioned the camera to snap a selfie with them.

“She was so casual,” The source said. “She actually seemed like didn’t want to take the attention away from the drag queens. She filmed everyone with her camera and light attached.”

Naturally, she was covered in smeared face paint that she herself says gives makes her look like  “a pissed-off teenager that made out with a clown.” Gaga posed for several shots with fans. Shangela, a popular DJ and drag queen, Instagrammed a snap of the twosome,  writing, “She was super sweet and showed love to all the Queens and Fans. A True Star!” Another eyewitness backed up this claim, telling E! News Gaga was “really cool, down to earth.”

But Mother Monster didn’t forget why she was at Micky’s in the first place! As the club played “Applause” and the drag queens encouraged the crowd to dance, Gaga kept the cameras rolling, looking “really involved in filming,” according to an eyewitness.

And if you happened to have been born on Aug. 12, you were in luck! The hostess called for any clubbers celebrating their birthday to come to the stage. Per an eyewitness, IDs were checked to verify everyone was telling the truth. Then, Gaga sang a soulful “Happy Birthday” to the 20 or so people on stage. After the song, she gave each one a hug.

That deserves a round of applause!